A season of success with the Nottingham Panthers | Latest news 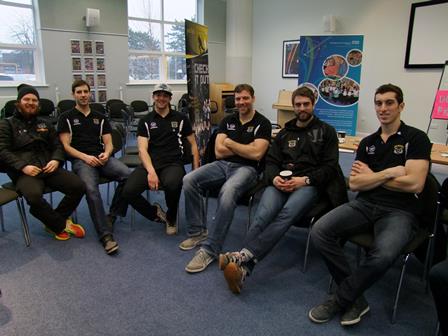 Nottinghamshire Healthcare's campaign with the GMB Nottingham Panthers is coming to an end at the Panthers' last home game on 20 March after its fifth successful season.

‘Check it Out – Healthy Body, Healthy Mind' launched last October and since then, staff at the Trust and Panthers players have encouraged people to ‘check out' key health messages.

Not only has the campaign promoted physical and mental wellbeing, it has also helped hundreds of service users that without the campaign, wouldn't have the opportunity to attend events like the ice hockey. Over 2000 tickets have been allocated to service users, carers, volunteers and staff.

"This year's campaign has made such an impact to our service users, carers and volunteers and has successfully raised the profile of the Trust. The feedback has been overwhelming and I am very proud to have been part of its success.

"People can underestimate the importance of engagement campaigns like this one but I have seen first-hand at the games just how much people appreciate it. A key moment for me was when a service user told me that if it wasn't for being at the game, he would have self-harmed and been admitted to hospital – that really makes it all worth it."

An online survey was undertaken at the games and out of the sample of surveys:

During the games, people were asked to post feedback on the Patient Opinion website about the campaign. One carer explained that her grandson lives with her following a difficult relationship with his mother, which resulted in him having mental health issues. She added:

"When I saw that the Trust was getting involved in this campaign I immediately applied for tickets and was fortunate enough to get some. My grandson has never experienced anything like it, he loved it! His face shone with excitement - I have never seen him so animated."

"I am a disabled person who spends a lot of time in pain and also have mental health issues. Getting tickets to the Panthers was great, it gave me a much needed opportunity to get out and enjoy life for a change. My only regret is that these opportunities don't happen more often so more of us could benefit from them."

"We have worked with the Panthers for five years now and each year the campaign gets better. The team is committed to our patients and service users and players make the effort to visit them throughout the season, which has a huge positive impact on our services.

"The campaign is a great example of how the health service and a local sports team can work together to promote key health messages in a way that people can relate to."

As part of the campaign, Panthers players also got involved with Trust services. Activity included players ‘rocking it out' to Pharell Williams with young people at Thorneywood Child and Adolescent Unit for the Trust's ‘Happy' anti-stigma film, going tenpin bowling with service users from the Community Rehab Unit and the whole Panthers team and management visiting Highbury Hospital to undertake Dementia Friends Training.

Gary Moran, General Manager, GMB Nottingham Panthers commented on the campaign's success, "Our work with Nottinghamshire Healthcare is vitally important to us and everyone connected with the club. Panthers have a massive fan base and a high profile in this area and we like helping the community. Every guy on the team is someone's favourite so what better way to hear a message about mental and physical health and wellbeing than to hear it from your favourite ice hockey player?

"We all have problems that can be tackled especially with help from the experts in the NHS and we are pleased and proud to have played a part in the excellent ‘Check It Out' campaign again this year. We pride ourselves on being associated with the best and this campaign is a born winner."