Hannah Marshall, 32, from, Retford, always knew she wanted to breastfeed but, during the first few days of motherhood, it didn’t go quite as she’d hoped.

However, after finding support at a local breastfeeding group, run by Nottinghamshire Healthcare, Hannah is now sharing her story to encourage other mums who are struggling to access the help that’s available.

At a few days old, Hannah’s new son, Isaac, was admitted to hospital with weight loss after struggling to latch on. It was a hard time for new parents Hannah and Simon. “The first few weeks were very difficult” Hannah explains. “I felt guilty for not being able to provide what Isaac needed.  Feeding was painful. And the struggle affected my relationship with Simon – he wanted to start formula feeding, so we could see how much Isaac was having. But I was determined to succeed at breastfeeding! I wasn’t ready to give up.” 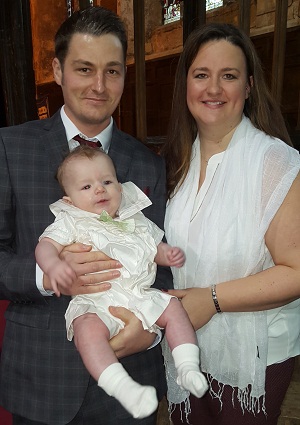 “I got lots of support from Vicky, a Breastfeeding Support Worker with the Infant Feeding Team. She suggested using a nipple shield, which was a huge help. As soon as I tried it, Isaac latched on immediately. Once his latch became more established, we were able to stop using it after just a couple of weeks.

“Vicky suggested I went along to the local breastfeeding support group too, when Isaac was four-weeks-old. I never thought I’d be one of those Mums who went to groups – I get nervous meeting new people – but I love it now! The group – we call it the boob group – support me a lot. We’ve each discussed our struggles. Some mums have helped me and I’ve helped others. You feel part of a team. Before I went to the group I’d never fed Isaac in public. But, with help from the group, I’ve learnt not to worry about breastfeeding when I’m out and about – he’s even ‘had the boob’ in church!

“By the time Isaac was six-weeks-old, breastfeeding had become a lot easier. Suddenly, it felt like I’d been doing it forever! I’m still feeding Isaac now, nine months later. And we’ll carry on until he’s ready to stop.

“Looking ahead, I’m hoping to start the Breastfeeding Peer Supporter Course soon. I’m really keen to help other mums the way I’ve been helped. I’ve recently started horse riding again too. Isaac comes down to the yard with me – he loves the horses - and he often needs a feed while we’re there, so we’ll sit down on a tack box and ‘whip a boob out!’ The horses don’t seem to mind! I’m also planning my wedding too. Who knows, I might need a breastfeeding-friendly dress if I’m still breastfeeding!

“If you’re struggling to breastfeed, seek out your local support group - we’re always keen to welcome new mums! It will help you realise that you aren’t alone. Isaac and I have made some really good friends through the group and we’ve shared lots of tears and laughter. It’s a wonderful thing to be part of -I wouldn’t be without my boob group!”

For more information about breastfeeding support services in Bassetlaw visit the Infant Feeding section of our website. stories on our Trust blog: On Our Mind