Cheryl McAulay didn’t have a typical 21st birthday. Instead of the big party she’d planned, the mother-of-one from Strelley saw in her birthday at a mother and baby unit. She was being treated for postpartum psychosis, a severe mental health illness currently being highlighted in the EastEnders storyline with Stacey Branning.

Cheryl, now 31, was admitted to the MBU at the Queen’s Medical Centre, three weeks after giving birth to her son, Joel. The six-bed inpatient psychiatric unit, part of Nottinghamshire Healthcare, provides care to women who are suffering from severe perinatal mental illness.

Now, inspired by the BBC’s recent In the Mind season, Cheryl is sharing her story to help raise awareness of perinatal mental illness.

“I was 20 when I fell pregnant. Not many of my friends had children. I attended a few antenatal classes, visits with the midwife and GP, but mental health wasn’t a topic we ever talked about. It never came up.

“A couple of days after I had Joel I went home to my parents’ house and then, shortly afterwards, I went to live with Joel’s dad, at his parents’ house. 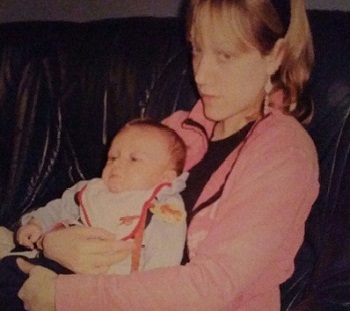 “I didn’t recognise it at the time, but my behaviour had started to change. I felt so hyper. I was talking at high speed. Sleeping was a struggle. The smallest tasks, just making dinner, felt impossible. One day, Joel’s dad walked in on me holding Joel’s foot under cold running water. ‘I was training him not to cry’ I said. It was after that I agreed to see my doctor.

“My GP sent me straight to the QMC where I spoke with a psychiatrist before I was admitted to the mother and baby unit. I didn’t understand why. As everyone left, I kept shouting: ‘what’s going on? There’s nothing wrong with me!’

“I thought the whole thing was a set up. ‘This isn’t a ward’ I thought. ‘These patients aren’t real patients, they’re actors. I’m on a reality show. I’m not unwell. This whole ward is for me and my show.’ I’d hide in corners so that the ‘cameras’ couldn’t find me. I’d tell everyone what I thought was going on and I wouldn’t pay attention when they told me otherwise.

‘Mums with mental illness want to hurt their babies’ I thought. ‘Not me. I don’t want to hurt Joel. I love him. I want to protect him.'

"During my stay, another woman was admitted to the unit with depression. I became convinced she would try to kill her baby but kill Joel by mistake. ‘Keep her away from my baby’ I’d shout. ‘It’s not safe; she’s going to kill him.’ I can still remember the look of sadness on her face.

“I had my 21st birthday at the unit, still believing I was on a TV show. I had a cake, which I cut up in despair and gave out to the ‘actors’. I was angry. I had plans for a big party but instead I was being held prisoner.

“I soon realised I’d be spending Christmas in the unit too. I’d struggled with various delusions and, although my thoughts were finally coming back together, I was still stiff and zoned out. On Christmas Day I was allowed home for a couple of hours. But it was hard. Everything was such a struggle. The glimpse of home upset me and afterwards I had to return to the unit as the only patient there.

“As time went on though, things got better. My recovery was slow, but it was recovery nonetheless. 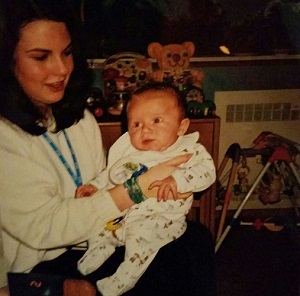 “It turned out I was very sensitive to my medication but, eventually, the doctors found the right dose for me. One day, when I was singing to Joel and getting him dressed, a nurse stopped and said how nice it was to see me getting him ready on my own. After almost four months at the unit, I was finally getting better. I was finally realising that I hadn’t been well and I did need help. Once discharged, Wendy, my Mental Health Nurse, visited regularly to make sure I was ok. She gave me the support I needed at home.

“After my recovery, my friends explained how concerned they’d been; how they had worried I’d never be ‘Cheryl’ again. Others weren’t so understanding though. ‘Don’t talk to her, she’s mental’ I’d hear. It really angered me.  They had no idea what I’d been through. I later found out that there was a history of mental illness in my family but, because of the stigma which surrounds it, it was never talked about. I’ve wondered since if a better understanding of mental illness would have helped me.

“I’m so grateful to all the staff at the mother and baby unit. I couldn’t have been at a better place; I felt so looked after.

“Sadly though, this doesn’t always happen. The thought of mums going through this without a mother and baby unit is heartbreaking. Having your baby taken away isn’t going to help. A mum should be able to bond with her baby whilst she receives the medical care she needs.

“Joel is 11 now, and I’ve considered a career in mental health nursing. I want to raise awareness of perinatal mental illness and the different ways it can show itself. Before, I always thought mums with mental illness wanted to hurt their babies. But that’s not the case. I was never violent. I never wanted to harm myself or my baby. I was just under a psychosis that took me away from reality."

Open House is a peer support group in Nottingham for those affected by maternal mental health problems. You can also find further information on the NHS website.

Action Postpartum Psychosis (APP) campaign nationally for the development of services for women with serious mental illness related to childbirth.