The Trust has been shortlisted in two categories at The Dental Awards 2016, hosted by Dental Republic.

The Dental Awards recognise teams and individuals whose commitment to patient care and professional development continues to raise standards across UK dentistry.

The Trust’s Oral Health Promotion Team has been shortlisted for the Team of the Year and Best National Smile Month Event awards. 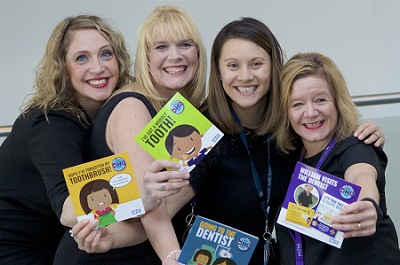 The team, also known as the Tooth Fairies of Nottingham, was nominated for their ‘H2O is the Way to Go’ campaign, run during National Smile Month in May 2015. The team visited local primary schools to talk about the importance of looking after ‘small smiles’ and encourage drinking water instead of sugary drinks. They talked to over 1,500 children during the month, all of which received colourful water bottles, toothbrushes and toothbrushing charts to keep them motivated throughout the year.

The team also worked with local dental practices to highlight the importance of good oral health to young patients, through fun and educational activities.

It’s not the first time the Trust has been recognised at the awards; the team were also named Oral Health Promoter of the Year in 2014 and 2015.

To be shortlisted for not one, but two, awards is absolutely wonderful! I am very proud of the team. We continue to move forward and overcome challenges in new and innovative ways.

Dental Republic received hundreds of nominations for this year’s awards. The team is one of eight finalists in the Team of the Year and Best National Smile Month Event categories.

Winners will be announced on 22 April at an awards ceremony held alongside The Dentistry Show in Birmingham.