Gay, lesbian and bisexual public sector workers in Nottinghamshire have shared their first-hand accounts of coming out in the workplace, as part of a drive to inspire others to have the confidence to be open about their sexual orientation.

Staff and officials across local government, the NHS, emergency services and education tell their personal stories in a powerful film designed to encourage lesbian, gay, bisexual and trans (LGBT+) colleagues to feel comfortable, and proud, to be out at work.

It has been produced by West Nottinghamshire College students as part of a project called ‘Our LGBT+ Role Models’ spearheaded by the Nottinghamshire Diversity Champions Partnership, made up of organisations that have featured in equality charity Stonewall’s list of top 100 employers in the UK for promoting LGBT+ equality, plus a partnership organisation that displays positive practice.

Results of Stonewall’s Workplace Equality Index 2017 – a confidential survey that drew 91,248 responses from employees across the UK – revealed that just 20 per cent of lesbian, gay and bisexual respondents in the East Midlands were comfortable being completely out in the workplace, which is the lowest proportion of any region of the UK. However, LGBT+ respondents who agreed they can be themselves in the workplace were more than twice as likely to be satisfied with their sense of achievement compared to those who disagreed (84 per cent compared to 38 per cent).

The role models project aims to challenge stereotypes and break down barriers that may exist and give LGBT+ employees the platform to be themselves, where they choose to do so.

The films have been produced by West Nottinghamshire College media production students Emilie Wright, Matthew Hart and Saul Turner as part of their course work. There is also a short, trailer-length version featuring interview clips and high-impact messages.

The trailer-length film had its first public screening at the ‘Exploring Intersectionality and the Power of Roles Models’ conference, which is the second to be organised by the partnership.

Co-chaired by councillor Toby Neal, the city council’s executive assistant for equalities, customer focus, IT and technology; and Sue Fish, former chief constable of Nottinghamshire Police and a well-known equality advocate, the event featured keynote speakers from a host of organisations including Stonewall, British Transport Police, and the University of Nottingham, along with several of the role models that appear in the films.

Held to coincide with LGBT+ History Month, it was attended by almost 150 employees from the partnership organisations, plus members of the local LGBT+ community and allies.

Following the launch, the films will be used as promotional, training and awareness-raising tools by each organisation. The profiles will also be available on their websites, social media and YouTube channels so they can be seen by external audiences. 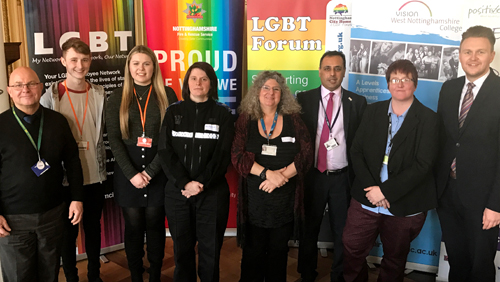 “Don’t be ashamed of who you are”

The video campaign features people from a wide range of organisations, who share their own unique experiences of coming out.

Rosey Cox decided to reveal her sexual orientation to her colleagues a year after joining Nottingham City Council in 2004, after growing tired of “living a complete lie that I struggled to keep up with”.

Describing the experience as “definitely a good one”, she said: “People were interested in my life, in the real me. They took time to find out what it meant and how they could make it so that I was more comfortable at work.”

“Initially, I planned for the worst-case scenario on how people’s reactions would be, but it was the complete opposite,” added Ms Cox, who has a dual role as the authority’s LGBT+ lead.

Councillor Payne, who represents the Arnold North ward of Nottinghamshire County Council while also serving as deputy leader of Gedling Borough Council, made the decision to come out shortly after meeting his current partner.

“I just thought ‘If I’m going to stand-up for the values I believe in, I need to be true to who I am,’” he said.

“I discovered there is more support for people who are gay than I thought there was and, actually, it’s not really an issue. But since coming out, I’ve been more comfortable speaking about particular issues that affect minorities and particularly the LGBT+ community, because I can speak from experience,” added Cllr Payne.

Working in an inclusive, supportive environment prompted Christian Liquorish to be open about his sexual orientation amongst colleagues.

He said: “The experience was very comfortable for me, because there were so many people around Nottingham City Homes that were supportive and understanding.”

The vice-chair of the organisation’s LGBT+ forum added: “The advice I’d give to anybody who is LGBT+ is ‘never be afraid to speak out and don’t be ashamed of who you are. Be comfortable, be happy – and live your life.’”

She insists being gay has helped her engage with the LGBT+ community in the St Ann’s area of Nottingham, where she is based – from policing Pride events to helping young people “at a really low crisis point” due to struggling with their sexual orientation.

“I’ve been able to be empathetic and get on with them, so that’s been a big help,” said Ms Proudley. “It is so important to normalise being gay – that it is normal and it is acceptable.”

Firefighter Sean McCallum says revealing his bisexuality to his colleagues made him more productive at work.

The crew manager at Retford Fire Station said: “I don’t spend time pretending to be something that I’m not, covering my tracks, worrying if somebody finds out about my difference in terms of sexual orientation. So I certainly felt, within a very short time of coming out in the workplace, that I was performing better. I was much happier.”

And while he’s proud to be part of the campaign, Mr McCallum hopes LGBT+ role models won’t be needed in future.

“That’s the goal for me – and to get to a point where sexual orientation is a non-issue,” said Mr McCallum, who is a former LGBT+ official on the Fire Brigades Union.

An “uncomfortable” past experience of being ‘outed’ by staff at a previous employer prompted Elisabeth Britz to come out to her colleagues at Rampton Hospital, near Retford, just weeks after joining Nottinghamshire Healthcare NHS Foundation Trust in 2004.

“Professionally, it’s made a lot of difference. It means I can be myself; I’m not tip-toeing around trying to pretend to be one person at home and another person at work,” said Ms Britz, who is vice-chair of the trust’s sexual orientation equality steering committee.

“It’s meant that, hopefully, I can present a positive impression of who a gay woman is. People have a lot of stereotypes and hopefully I dispel a lot of those.”

EMAS equality and diversity manager Paul Fitzgerald has proudly lived as a gay man since coming out at the age of 14, more than 40 years ago.

He is equally proud of his involvement in the role models campaign, saying: “When I was growing up, I had no role models at all, other than the stereotype ‘camp’ characters that appeared on television and they were deemed to be deviants.

“So I think it is vitally-important that young people – and people across the globe, really – have good role models so that they can see people that are just like themselves, who present no threat to society and just get on with their lives.”

Although he never actually hid his sexual orientation, Paul Rana chose to become Vision West Nottinghamshire College’s face of the campaign as a way of coming out to colleagues.

And while he insists being out has made no difference to how he is treated by staff, it does help him to support students facing similar issues.

He said: “Sometimes, I have to deal with difficult safeguarding issues and some involve LGBT+ students. It’s sometimes tough hearing their experiences, and they can remind me of my own. This makes me even more determined to ensure they receive positive outcomes.”

The Our LGBT+ Role Models films were produced by West Nottinghamshire College media students Emilie Wright, 18, Matthew Hart, 19, and Saul Turner, 21, for an industry-related project designed to equip them with the skills and experience to work with real-life clients.

It saw the students – who are in the second year of the BTEC Level 3 in Media Production (Film and television) – script the interview questions, film out on location, and edit the footage in the college’s state-of-the-art editing suites.

Emilie, from Mansfield, whose ambition is to become a film director, said: “Personally, I didn’t know a lot about LGBT+ issues before this project, so we conducted research to prepare us for the interviews. It was interesting, but also quite sad, to discover there are people who feel they need to hide who they are in workplaces and with their friends.

“Hopefully, people thinking about coming out will watch the films and think ‘This is really inspirational; I’m going to show everybody who I am and not hide it anymore.’”

Saul, from Sutton-in-Ashfield, who wants to work as a film and TV editor, said: “We’re trying to remove any negativity and stigma surrounding the topic, and show people that it’s okay to be LGBT+ by putting it in a positive light. Once we started filming, people really started opening up and expressing themselves. I want the films to convey the same feeling we got when we were in the room listening to them. Above all, I hope it makes people think.”