The Trust’s Infection Prevention and Control Team, Forensic Services Division, won the inaugural award for the Best Clinical Team in secure environments at the third Health and Justice Summit.

The summit is jointly organised by the RCGP Secure Environments Group, Ashworth, Broadmoor and Rampton high secure hospitals and the forensic section of the RCPsych, and supported by NHS England.

The award was introduced this year to recognise the multi-disciplinary team that has had the greatest impact on improving health outcomes for people in secure environments. 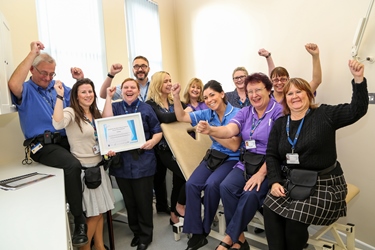 The Trust team’s project, launched in 2013, aimed to reduce the number of sharps incidents across  Forensic Services by introducing new safety devices and training. The hope is to offer a safer work environment for patients and staff, reducing the risk of occupational transmission of blood borne viruses and the resulting physical and mental impact on staff and patients.

New devices to reduce and prevent patients and staff receiving injuries when using needles or sharp items were distributed to staff and some patients across the Division, who were given training with follow up support available, and reminded how to report any sharps injuries. The team predicted that the project would help reduce the number of sharps injuries by half.

As the project progressed they made changes where necessary, with modifications including the introduction of retractable needles, retractable insulin needles used by patients and staff, a post-incident questionnaire for all staff affected by a sharps injury, an E-Learning Module, new sharps bins placed at the point of care and part of the Trustwide ‘Are you Sharp Safe’ campaign.

Natalie Jennings, Senior Manager/Matron Physical Health Infection Prevention and Control Forensic Services said: “Our award entry had to demonstrate the PDSA approach to service innovation – plan, do, study, act – and the fact that we went through that cycle a number of times during the project is testament to the hard work of everyone involved.

“The introduction of new mechanical devices and the change to sharps box practice at the point of care first needed security approval, and a high secure environment brings additional risks and challenges involving sharps.

“And the hard work is paying off - the last clinical sharps injury in the Division was in March 2015, and sharps injuries to patients and staff have reduced in total by 89%. Pixy Strazds, the Lead Infection Control Practitioner for Forensic Services, has been instrumental in embedding best practice across the Division and this award is a credit to her hard work.

“The number of sharps incidents reduced to 12 in 2014 and two to the end of July 2015 for the Division. It is likely that by the end of this year we will again be significantly lower than the year before, reducing the psychological impact of these incidents and the ripple effect of the harm they can cause.”

Julie Hall, Executive Director Forensic Services added: “It was really great to see that the work of the health centre at Rampton was celebrated and sincere congratulations on your collective success in winning the award.”